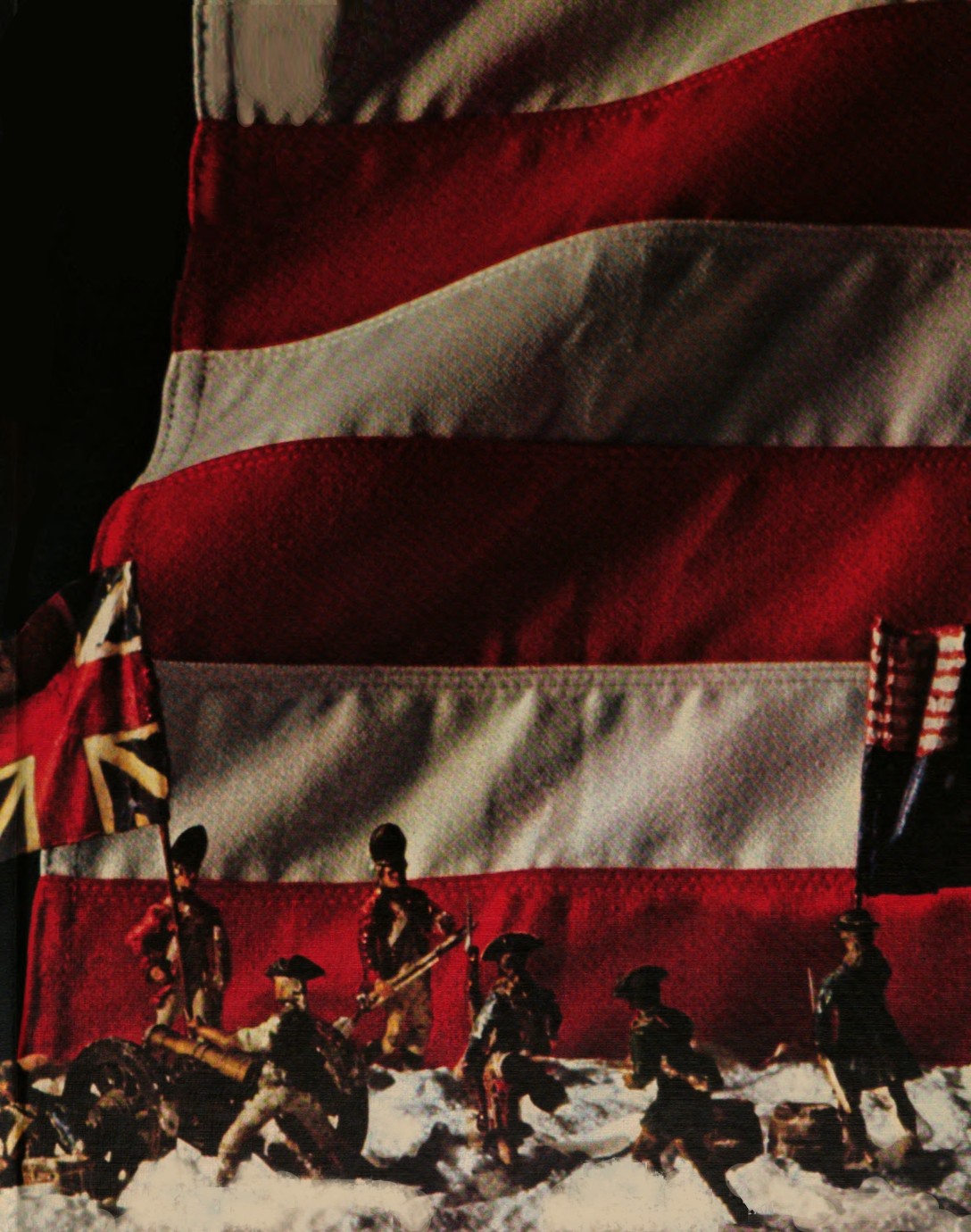 "The 'Spirit of 76.' It has endured for two hundred years. It was there — unformed and unnamed — the night disguised patriots threw chests of British-taxed tea into Boston Harbor. It became a fearful reality as rebel drum beats summoned Minutemen to Lexington Green. It was proudly declared in that summer of 1776, when men signed their names to a document that began,'When, in the course of human events, it becomes necessary for one people to dissolve the political bands which have connected them with another...' It was formally conceded by the British five years later, on the fields of Yorktown, as the American, General Lincoln, received the sword of defeated Cornwallis. Many fought to keep that spirit alive. Young, old, famous, unknown. Benjamin Franklin was 70 the year he signed the Declaration of Independence."

"On September 23, 1779, Captain John Paul Jones fought a battle without parallel in naval history. Hitherto the contest upon the sea had been mainly a predatory warfare of privateers, aimed at the destruction of commerce and the plunder of merchant vessels. The young republic was without a navy proper. Called 'Pirate Jones' by the English, for retaliating on the coast of England for the atrocities committed on the coast of America, the captain of the Bon Homme Richard gallantly refused the sword of the surrending captain of the Serapis — but did take his ship."

"Numerous converging and intersecting railways, extensive manufactures, and a considerable West-India commerce, contribute to the life and wealth of this beautiful city. Its suburbs are adorned with tasteful villas, and afford inviting drives and charming prospects. Of principal interest among its suburban attractions are the crags known as East and West Rocks — two bold and striking bluffs of trap-rock, lifting themselves, in magnificent array of opposition, about four hundred feet out of the plain which skirts the city. Their geological origin was probably some anomalous volcanic convulsion; and their grim heights may have sentinelled, in remote ages of our planet, the flow of the Connecticut River between their august feet to the Sound." 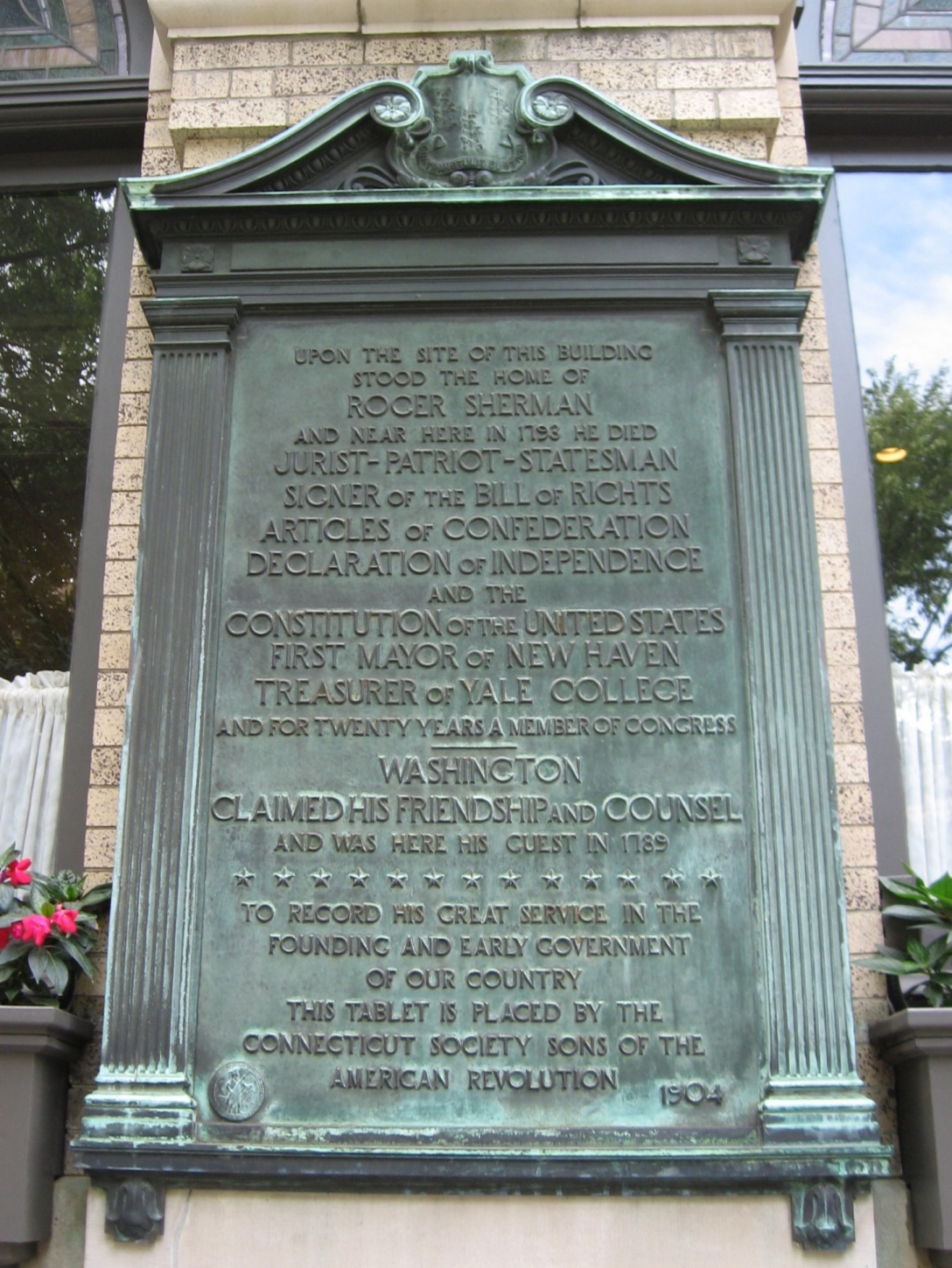 "Upon the site of this building stood the home of Roger Sherman, and near here in 1793 he died, jurist - patriot - statesman, signer of the Bill of Rights, Articles of Confederation, Declaration of Independence and the Constitution of the United States, first Mayor of New Haven, Treasurer of Yale College, and for twenty years a member of Congress -- Washington claimed his friendship and counsel, and was here his guest in 1789 -- to record his great service in the founding and early government of our country, this tablet is placed by the Connecticut society, Sons of the American Revolution, 1904."

"This archetype of the Connecticut Yankee had a reputation for taciturnity. One of his political mottoes was: 'When you are in a minority, talk, when you are in a majority, vote!' In his country drawl, daughter came out as 'dat-ter' and applesauce sounded like 'ap-plesass.' But Jefferson remarked that however awkward his manner Sherman 'never said a foolish thing in his life.' And he was by no means silent. During the Convention he spoke 138 times, each speech short but pithy, only three others were more vocal."