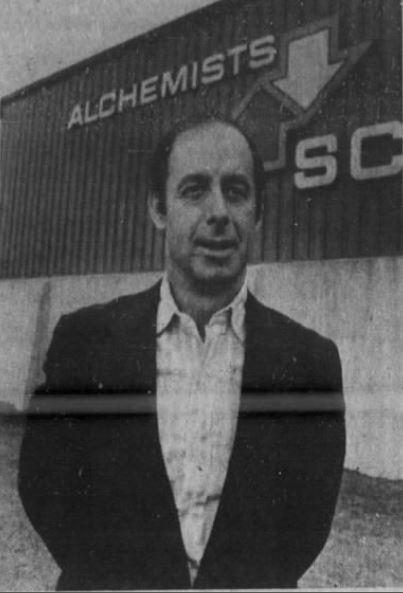 “Sitting at his desk at the family scrap business here, a large painting of a wide-hipped nude behind him, Joel Schiavone does not look like a one-man urban renewal agency.

‘I’m doing things the city of New Haven should have done 10 years ago,’ Schiavone said in an interview for which he dressed, as usual, informally.

Using the company founded by his grandfather as a base, Schiavone in the last year has:

Schiavone, a slender 42-year-old man whose dark hair is thinning, has been telling New Haven officials for seven years what ought to be done downtown ‘to create an environment where development can take place.’

So about a year ago, Schiavone began to do more than complain. He formed a new subsidiary, Schiavone Realty & Development Corp., and hired Thomas A. Burich, former head of the local Boys’ Clubs, to run it.

The realty company owns office buildings in Hartford (at 266 Pearl St.), Atlanta and West Palm Beach, Fla., and is developing a Norwalk site for a limousine terminal, but Schiavone likes to talk most about the New Haven projects.

And he has no regrets about the 10 years he spent in the bar business. ‘I had a unique opportunity to run my own business at a very young age,’ he said. ‘I was 24 or 25. I made a lot of money… and I developed a lot of self-confidence. If I’d worked for my father… I don’t think I would have had that.’

But Schiavone finally did end up working for his father, Joseph, in ’72. And when Joseph died, Joel and his brother Michael took control of the prosperous scrap metal business based alongside I-95 in North Haven, where its massive stockpiles of scrap are a familiar site to passing motorists.

Three or four years ago, Schiavone began making acquisitions to diversify the business. Besides the real estate business and the limousine service, Michael Schiavone & Sons Inc. has investments in the Docktor Pet chain of pet stores, the Bridgeport cable television franchise and another in Radnor, Pa., and the Shoreline Times, a chain of eight weekly newspapers which circulate north and east of New Haven.

‘They’re all in service-type industries,’ Schiavone said of the acquisitions. ‘They’re not in manufacturing at all. They all appeal to the leisure-time and the disposable-income sector of our economy.’

The firm has annual revenues fluctuating between $50 million and $80 million, depending on the market price for scrap, Schiavone said.

Despite his prosperity and his increasing prominence in New Haven, Schiavone has not become a conventional executive in a three-piece gray suit.

Although he is rarely seen in a suit, he apparently owns at least one. The Christmas card he sent out to the local business community last year showed him, in coat and tie, with his hand resting on a globe.

The inside showed the same pose from the rear – except Schiavone was stark naked.

‘We’re going to try to make as much money as we can downtown and create as much enthusiasm as we can,’ he said.

The company won’t be doing a lot of demolition, he said. Schiavone thinks there has been too much of that already.

Earlier redevelopment efforts ‘removed viable downtown areas that worked,’ he explained, adding with a touch of hyperbole, ‘They have torn down every old building in town to create parking spaces.’

The only way for downtown New Haven to compete with suburban malls is to restore old buildings, he said. ‘Suburbs can’t create charm.’

Restoration of old buildings, therefore, is at the center of Schiavone’s downtown projects, for which he is seeking financing from Connecticut Bank and Trust Co., from Yale University and – in the movie theatre renovation project – from the federal government’s Urban Development Action Grant program.

‘We have found a property, publicized the hell out of it and then investigated the market (for financing),’ Burich said.

‘Joel Schiavone could be the greatest thing to happen to New Haven since Dick Lee,’ said one important figure in the administration of former Mayor Richard C. Lee during the heyday of redevelopment in New Haven.

But, he added, ‘Joel Schiavone hasn’t been tested yet.’ His plans for downtown are still just plans.

By all appearances, Schiavone is a successful – if a bit eccentric – entrepreneur in the private sector.

He launched his first venture in the early 1960s shortly after graduating with a master’s degree from the Harvard Business School.

‘I was a banjo player and I wanted a place to play. I went around to a variety of bar owners,’ Schiavone recalled. None of them was interested in his old-time music.

‘So I went out and bought my own bar – and it worked,’ he said. Thus began the chain known as Your Father’s Moustache which, at its peak, had 12 outlets from Denver to Brussels.

Schiavone married in 1969 and became a father two years later. ‘The nightclub life… and the amount of time I had to be in an airplane was clearly not the kind of environment I wanted to have any more.’

So he joined the family business in 1972. Some clubs were closed. Others were sold. Schiavone now owns just one – on Cape Cod – and he is selling it.