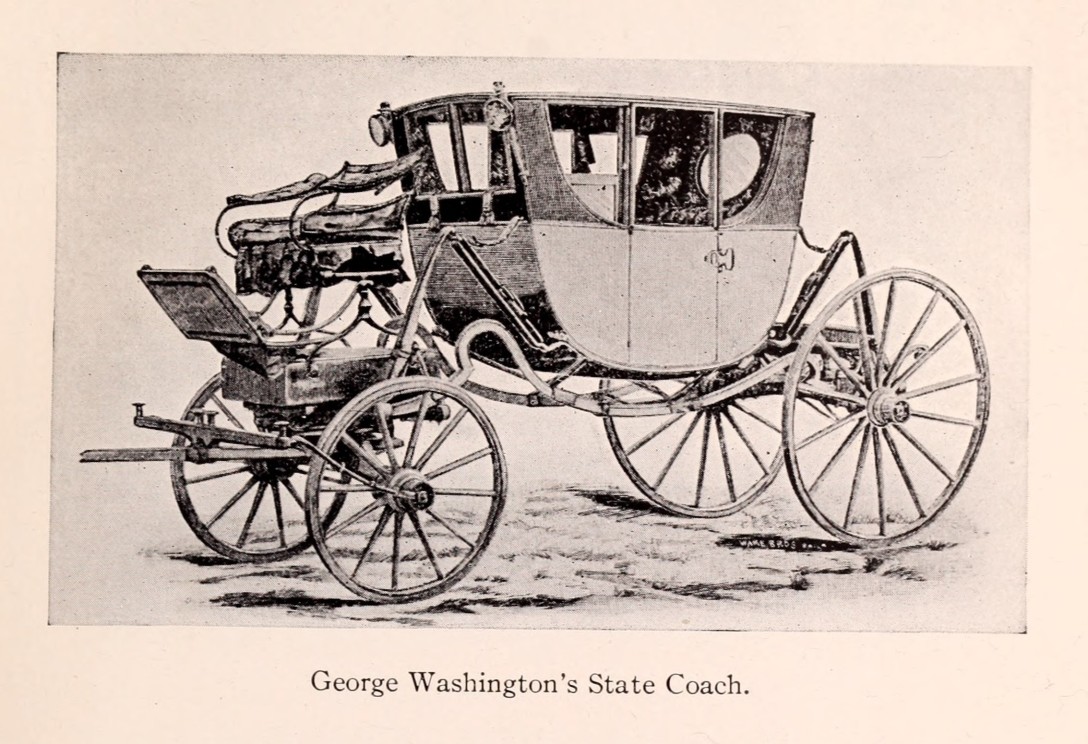 [In part; from New York to Springfield]

Extracts from the Diary of Washington: From the first day of October, 1789, to the tenth day of March, 1790. From the Original Manuscript now first printed. New York, 1858. By permission of Estate of Janus F. Joy.

Commenced my Journey about 9 o’clock for Boston and a tour through the Eastern States.

The Chief Justice, Mr. Jay — and the Secretaries of the Treasury and War Departments accompanied me some distance out of the city. About 10 o’clock it began to Rain, and continued to do so till 1 1 , when we arrived at the house of one Hoyatt, who keeps a Tavern at Kingsbridge, where we, that is, Major Jackson, Mr. Lear and myself, with six servants, which composed my Retinue, dined. After dinner, through frequent light showers we proceeded to the Tavern of a Mrs. Haviland at Rye; who keeps a very neat and decent Inn.

The Road for the greater part, indeed the whole way, was very rough and stoney, but the Land strong, well covered with grass and luxuriant crop of Indian Corn intermixed with Pompions (which were yet ungathered) in the fields. We met four droves of Beef Cattle for the New York Market, (about 30 in a drove) some of which were very fine — also a flock of Sheep for the same place. We scarcely passed a farm house that did not abd. in Geese…

Their Cattle seemed to be of good quality, and their hogs large but rather long legged.

…we breakfasted at Stamford, which is six miles further (at one Webb’s)… At Norwalk, which is ten miles further we made a halt to feed our horses. To the lower end of this town Sea Vessels come…

From hence to Fairfield where we dined and lodged we found all the Farmers busily employed in gathering, grinding and expressing the Juice of their apples; …The Destructive evidences of British cruelty are yet visible both in Norwalk and Fairfield; as there are the chimneys of many burnt houses standing in them yet. The principal export… is Horses and Cattle — salted Beef and Pork — Lumber and Indian Corn to the West Indies.

A little after sunrise we left Fairfield, and passing through Et. Fairfield breakfasted at Stratford, …a pretty village over near Stratford River. …At this place I was received with an effort at Military Parade; and was attended to the Ferry… by several Gentlemen on horseback. Doctor Johnson of the Senate, visited me here, being with Mrs. Johnson in this town (where he formerly resided). The [Housatonic] Ferry is near half a mile; and sometimes incommoded by winds and cross tides. The navigation of vessels for about 75 tons extends up to Danby.

The City of New Haven occupies a good deal of ground, but is thinly, though regularly laid out and built. The number of Souls in it are said to be about 4000. There is an Episcopal Church 3 Congregational Meeting Houses and a College, in which are at this time about 120 Students under Auspices of Doctor Styles [Ezra Stiles]. …The Exports from this City are much the same as from Fairfield &c, and flax seed, (chiefly to New York).

From the Ferry it is about 3 miles to Milford, …In this place there is but one Church, or in other words, but one steeple — but there are Grist and Saw mills, and a handsome Cascade over the Tumbling dam. …From Milford we took the lower road through West Haven, …and arrived at New Haven before two o’clock. …By taking the lower Road we missed a Committee of the Assembly, who had been appointed to wait upon and escort me into town — to prepare an address — and to conduct me when I should leave the City as far as they should judge proper. The address was presented at 7 o’clock — and at nine I received another address from the Congregational Clergy of the place. …I received the Compliment of a visit from Governor Mr. Huntington — The Lieutenant Governor Mr. Wolcott and the Mayor, Mr. Roger Sherman.

Went in the forenoon to the Episcopal Church, and in the afternoon to one of the Congregational Meeting-Houses. Attended to the first by the Speaker of the Assembly, Mr. Edwards, and a Mr. Ingersoll, and to the latter by the Governor, the Lieutenant Governor, The Mayor and Speaker.

These Gentlemen all dined with me (by invitation), as did Genl. Huntington, at the house of Mr. Brown, where I lodged, and who keeps a good Tavern. Drank Tea at the Mayor’s (Mr. Sherman.) Upon further inquiry I find that there has been about… yards of coarse Linen manufactured at this place since it was established — and that a Glass work is on foot here for the manufacture of Bottles. At 7 o’clock in the evening many Officers of this State, belonging to the late Continental army, called to pay their respects to me. By some of them it was said that the people of this State could, with more ease pay an additional 100,000, tax this year than what was laid last year.

Left New Haven at 6 o’clock and arrived at Wallingford (13 miles) by half after eight o’clock, when we breakfasted, and took a walk through the town. …At this place (Wallingford) we see the white Mulberry growing, raised from the seed, to feed the Silkworm. We also saw samples of lustring (exceeding good) which had been manufactured from the Cocoon raised in this Town, and silk thread very fine. This except the weaving, is the work of private families, …and is likely to turn out a beneficial amusement. …We arrived at Middletown, on Connecticut River, being met two or three miles from it by the respectable Citizens. …I took a walk round the Town, from the heights of which the prospect is beautiful. Belonging to this place, I was informed (by a Genl. Sage) that there were about 20 sea vessels…

Having dined, …passing through a Parish of Middletown and Weathersfield, we arrived at Hartford about sundown. At Weathersfield we were met by a party of the Hartford light horse, and a number of Gentlemen from the same place with Colonel Wadsworth, at their head, and escorted to Bub’s Tavern, where we lodged.

After breakfast, accompanied by Colonel Wadsworth, Mr. Ellsworth and Colonel Jesse Root, I viewed the woollen Manufactory at this place, which seems to be going on with spirit. Their Broadcloths are not of the first quality, as yet, but they are good; as are their Coatings, Cassimeres, Serges and Everlastings; of the first, that is, broad-cloth, I ordered a suit to be sent to me at New York — and of the latter a whole piece, to make breeches for my servants…

Dined and drank tea at Colonel Wadsworth’s and about 7 o’clock received from, and answered an Address of, the Town of Hartford.

By promise I was to have Breakfasted at Mr. Ellsworth’s at Windsor, on my way to Springfield, but the morning proving very wet, and the rain not ceasing till past 10 o’clock, I did not set out till half after that hour; I called, however, on Mr. Ellsworth and stayed there near an hour — reaching Springfield by 4 o’clock, …examined the Continental Stores at this place, which I found in very good order. …A Col. Worthington, Col. Williams, Adjutant General of the State of Massachusetts, Gen. Shepherd, Mr. Lyman, and many other Gentlemen sat an hour or two with me at Parson’s Tavern… which is a good house.”
-Excerpt courtesy of the HathiTrust Digital Library, “Old paths and legends of the New England border; Connecticut, Deerfield, Berkshire,” by Katharine M. Abbott, 1907. (top) Image courtesy of the HathiTrust Digital Library, “The old Boston post road, with 200 illustrations and maps,” by Stephen Jenkins, 1913