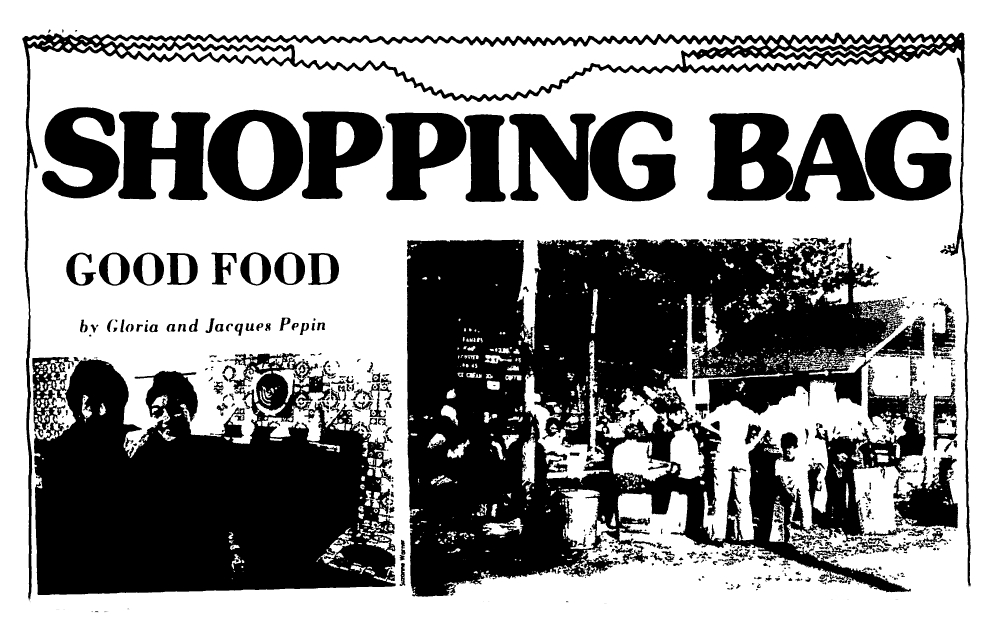 “‘There is no place just like this place anywhere near this place. For this must be The Place.’ So said the sign on ‘Whitey’s restaurant’ years ago. The sign is still there but now Whitey’s is called The Place.

It looks like a private outdoor party or a friendly country fair, convivial and joyous, relaxed, lots of fun, but it isn’t private. It is a roadside restaurant, or rather an outdoor roast restaurant.

This small summer eating venture, located on the Boston Post Road in Guilford is owned by Gary and Vaughn Knowles, two middle school teachers in Guilford, who during the summer feed the hungry people of the shoreline.

Vaughn has been at The Place for 15 years, eight on his own and seven previous years with Whitey, when the other side of the Boston Post Road was a green meadowland, now replaced by a new complex of shops and supermarkets. It is open from Memorial Day until Labor Day, seven days a week, and a month before and after these two dates, depending on weather conditions. It is open only on weekends. The Place is operated by nine young people, late teenage or early twenties, men and women alike, both working at the stove and helping on tables. The tips are shared and anyone will help at tables, at the ‘stove,’ or at cleaning up.

At The Place, the food is cooked in front of you on an enormous, 13-foot-long barbecue, made of cement blocks and fed by big timber from the Barttlet Lumber Yard in North Guilford.

Everything is cooked on this outdoor fire and the menu is plain and quite limited. Shrimp, clams, lobster and corn on the cob. The clams are opened and roasted, served plain or with a sauce, which doesn’t seem to be much more than a ketchup, and the soft shell clams are steamed in foil. Lobsters are roasted or steam-boiled in large pots and the corn is roasted on the fire in its husk, giving it a particular, delightful roasted taste.

Patrons do not complain about the shortness of the menu, because everything is fresh. A menu with few items, and a restaurant with a big turnover, always make for super fast food.

The two owners get most of their provisions from the Food Terminal in New Haven, except after the middle of July when Fonicello’s in Guilford supplies them with local corn. They handle an enormous amount of food during the summer and will sell approximately 5,000 lobsters between 1 and pounds, and about 200,000 clams. They use only the small little necks and the soft shell clams also called steamers.

There are practically no storage facilities at The Place, therefore, everything must be bought fresh daily, more work for the owner but a better product for the customer. The patrons, most of them the same over the years, are encouraged by the owners to bring wine, bread, salad, desserts, first course, and any other trimmings to accompany their meal.

The restaurant supplies each table with a few fresh flowers, a large box of napkins, which is really a must, wooden forks, and paper cups. The seats are large pieces of tree trunks and the floor a bed of clam shells. To go to The Place is to be invited to a barbecue (for a minimal price, of course) without having to do the work. Fortunately most of the bugs are kept away by the enormous barbecue’s fire and smoke.

The Place is not the cheapest place to eat in town, but fairly priced for lobster. It will cost you from $5.45 for a one pound lobster, to $6.15 for a one and one-half pounds cooked — roasted or steamed. The owners have no intention to extend their menu or their operation. They are very successful this way and intend to keep it at that. The food is good, honest and satisfying. However, the corn will be better when it will be local. The only suggestion we could make is to use butter rather than margarine with the com as well as the lobster.”
-Excerpt and (top) image courtesy of the Digital Archives of the James Blackstone Memorial Library, Branford Review, “Good Food,” by Gloria and Jacques Pepin, July 18, 1978

This Must Be, by Jane and Michael Stern

“ONE COLD DAY in the mid-1940s, Harold ‘Whitey’ Miller, a Connecticut clam digger who sold littlenecks off the back of a truck, laid some clams on a metal grate and put the grate over a hardwood fire he’d lit in an oil drum to keep warm. As the heat opened the shells and the air filled with a briny smell, passersby asked him if he would sell some of his fire-cooked clams. Soon, Miller had set up shop as a grilled clam stand, and in 1966 he opened an alfresco restaurant in a grove of trees alongside Route 1 in Guilford. Informality ruled. Plates were paper, customers had to bring not only their own wine and beer but bread and salad as well if they wanted some. Background music was provided by a portable radio hanging from a branch, and in lieu of chairs around the picnic tables, Miller offered seats made of tree stumps that he had cut smooth. To let people know he was there, he put up a sign that said, ‘There’s No Place Just Like This Place Anywhere Near This Place So This Must Be The Place.’

When we were grad students looking for a house outside New Haven in 1970, the aroma of clams being grilled at The Place persuaded us to settle in Guilford. For more than three decades now, we’ve returned to the same spot for picnic suppers that epitomizes summer on the shoreline. The world all around it has changed — Route 1 has gone from an old post road ambling through marshland to a congested, mall-lined shopping strip — but at The Place you still sit on tree stumps in the open air and eat clams, lobsters, and corn on the cob cooked over an open fire.

‘Magic happens when you roast clams on a wood fire,’ says Vaughn Knowles, who began working for Miller as a high school student and, with his wife, Judy, took over the business in 1971. Customers stand around the 20-foot-long fireplace waiting for the moment when the clams pop open. Plain roast clams are grand, but Specials are to die for. As soon as the clam opens, the top shell is removed and the clam is dabbed with cocktail sauce and margarine. It is then returned to the fire long enough for the sauce to darken and the clam to separate from the shell. Specials are served with a wooden fork for spearing the clam. Once the meat is eaten, true joy is slurped from the bottom of the small shell: an elixir of clam broth, sauce, and margarine. ‘You can do the same thing in an oven,’ Vaughn says. ‘But without the smoky taste from the fire, it isn’t worth doing.’

Corn is also transformed by direct-fire cooking. The husk turns dark and brittle; its surface dimples from the imprint of the kernels inside. The charred husk and silk easily slip away, and the whole cob gets a quick dip in butter before being served. Some customers ask for their corn ‘burnt,’ meaning it has a real crunch; others prefer just a hint of fire. ‘The way the corn reacts depends on the variety we are using,’ explains Vaughn’s brother Gary. ‘We start with Florida corn through June — that’s gotten really good over the last few years; it’s sweet and doesn’t turn starchy when it’s cooked. Around July 15, we go to native corn. That we get from a farmer down the road. We tell him how much we think we need that day and he goes out and picks it for us.’

Although the open pit makes cooking at The Place appear as casual as a picnic, tending the fire and arranging the food above it are not simple jobs. ‘You don’t just set a temperature,’ Vaughn reminds us. ‘A fire is always changing. We use debarked hardwood from a local mill. and we don’t know exactly what we’ll be getting. It’s often oak and hickory; sometimes birch, which burns fast. Oak isn’t as hot, but it lasts longer. A few times each night, we have to stop everything and rebuild the fire.’ Vaughn or Gary is in charge of that. Students who cook here start at the corn station, at the far end of the fire pit; after a year or two, they are moved to lobsters, which, to remain moist, are first boiled, then only briefly grilled. All the other fire-roasted entrées — steak, salmon, chicken, bluefish, and the clams — are cooked at the front of the fireplace by those with the most experience.

PARTLY BECAUSE its food is good, but also because it’s so quirky and friendly, The Place as earned tremendous customer loyalty. ‘This is nothing like a normal restaurant, where customers walk in with long faces expecting a serious meal,’ Gary says. ‘We don’t even have plates or glasses, other than a few odd glasses that diners have left behind. I’ll bring those out to a couple if it looks like they’re here for a romantic evening and they are opening a bottle of wine. It isn’t unusual for half our tables to be occupied by birthday or anniversary parties or even wedding rehearsal dinners. Late at night, Yale teams come to enjoy themselves and toast marshmallows over the fire. Eating here is fun. When people think of The Place, they smile.’

It’s not unusual to see celebrants arrange deluxe table settings on their own tablecloths or create a tabletop bar for making mixed drinks and pouring wine and beer. People who come here often also know that if a callow palate in the party doesn’t like anything cooked on the fire, it’s okay with the management if they bring junk food burgers for the dissident.

Those who become regulars earn a special honor. Gary inscribes their names in white paint on one of the tree-stump chairs. ‘It makes sense,’ he explains. ‘Over the years, returning families come to think of The Place as their place, so it’s only right to honor them. I tell them they have become stump worthy.'”
-Excerpt courtesy of Archive.org, “Roadfood: the coast-to-coast guide to 700 of the best barbecue joints, lobster shacks, ice cream parlors, highway diners, and much, much more,” by Jane and Michael Stern, 2008