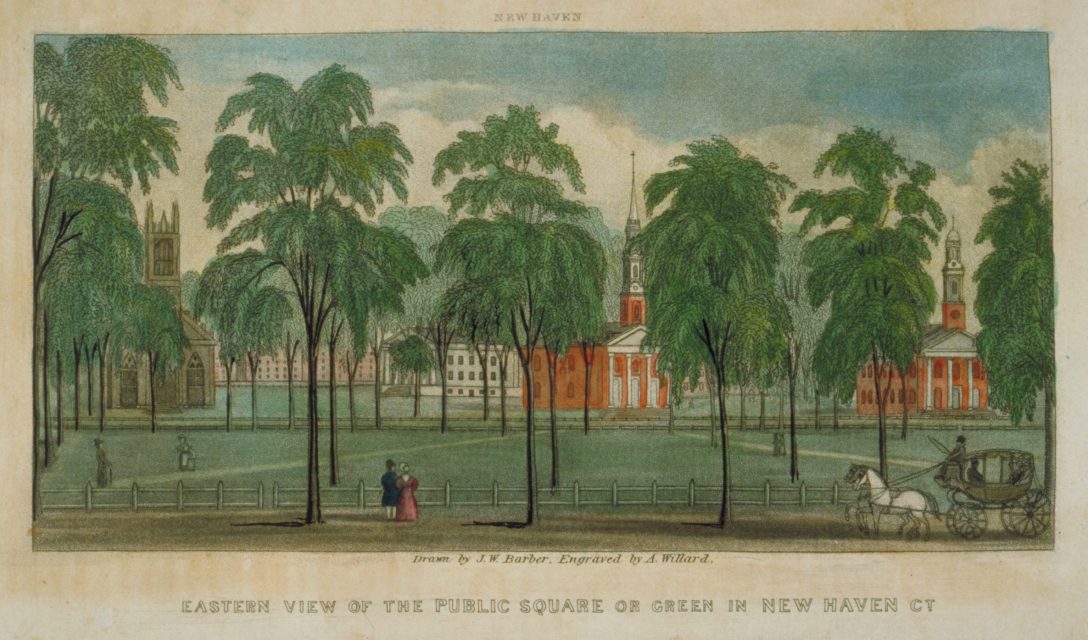 “While anti-billboard women pursued a grassroots ‘outside’ strategy, anti-billboard men commenced an ‘inside’ effort to influence policymakers, planners, and political elites. These men, such as Frederick Law Olmsted, J. Horace McFarland, and in New Haven, George Dudley Seymour, led the City Beautiful movement, and as such formed the moderate wing of the anti-billboard effort. An exemplar of the City Beautiful movement, Cass Gilbert and Frederic Law Olmsted’s Report of the New Haven Civic Improvement Commission observed in 1910 that New Haven’s streets were ‘made hideous by an incongruous jumble of signs.’ Gilbert and Olmsted explained further:

Extravagant advertising signs and billboards greatly injure the aspect of many New Haven streets. No one can question that the presence of large and frequently garish advertising signs, designed specifically to stand out strikingly from their surroundings and violently arrest the attention, is more or less irritating and annoying to most people… It is very seldom that the ordinary citizen gets any advantage from the signs and posters that begins to compensate him for the annoyance.

Gilbert and Olmsted went on to advocate taxes and licensing, rather than outright prohibition, as a reasonable way of controlling the proliferation of signs. That same year, George Dudley Seymour, head of New Haven’s first city planning commission, advocated similar regulations in a speech to the New Haven Chamber of Commerce. In a striking contrast to the moralizing rhetoric of the scenic sisters, Seymour appealed to the Chamber members’ elite cosmopolitan pretensions: ‘One of the great reasons why the cities on the continent of Europe impress the American traveler so much is, that the whole subject of advertising signs is so carefully regulated and controlled.’ Seymour observed that New Haven’s ‘reasonably good sign ordinance’ was not well enforced, and he urged the city to take ‘a progressive stand’ on sign regulation. Seymour took particular issue with electric signs, noting ‘the erection of an illuminated sign on the top of one of the buildings facing the Green.’ Like Gilbert and Olmsted, Seymour preferred taxation to outright prohibition, but his speech nevertheless aroused controversy in the business community.

Despite the pleas of Seymour and New Haven’s City Beautiful movement, the Board of Aldermen showed little commitment to stronger sign regulation. Indeed, the year before Seymour’s Chamber speech, the Board of Aldermen had granted permission for the Hyperion theatre to erect a flashy electric sign on its canopy over the sidewalk. Mayor James Martin wrote to the Board in protest, explaining that the sign was ‘strongly objected to by the owners and occupants of adjacent property.’ Yet, although three aldermen proposed a stricter ordinance to govern electric signs and a specific revocation of the Hyperion’s privilege, the full Board did not pass either measure. Indeed, a photo taken eight years later shows the offending sign in defiant splendor.

This episode echoed again in 1914, when the Board of Aldermen granted Shartenberg & Robinson a permit to erect a large marquee (sixty-seven feet long and twelve feet wide) on Chapel Street. George Dudley Seymour vigorously opposed the marquee as an ‘invasion of a public right.’ After the newspaper refused to publish Seymour’s letter of protest to the Board of Aldermen, Seymour was forced ‘to become a pamphleteer.’ Indeed, he also organized a blue-ribbon letter writing team, including former President Taft, Frederick Law Olmsted, and the President of the New York City Board of Aldermen. Taft wrote, ‘I think it is a very bad policy to encroach upon the streets in any way, and I am thoroughly in sympathy with Seymour’s opposition to the proposal.’ However, even these luminaries were not enough to convince the Board of Aldermen to change course. As Seymour lamented years later, ‘My protest failed (as most protests do), the Aldermen, under heavy pressure,’ allowed the marquee to be built. The marquee, he added, ‘remains a monument to what may be done… if enough pressure is exerted by and for petitioners for special privileges.’

Despite agitation from the scenic sisters, pleas from City Beautiful leaders, and two high-profile local sign controversies during the first quarter of the 20th century, New Haven took few legislative measures to restrict the proliferation of signs.”
-excerpt courtesy of, “Property in the Horizon: The Theory and Practice of Sign and Billboard Regulation,” by Jacob Loshin. Image (top) thanks to the New Haven Colony Historical Society by way of the Yale Library Historical New Haven Digital Collection, 1917