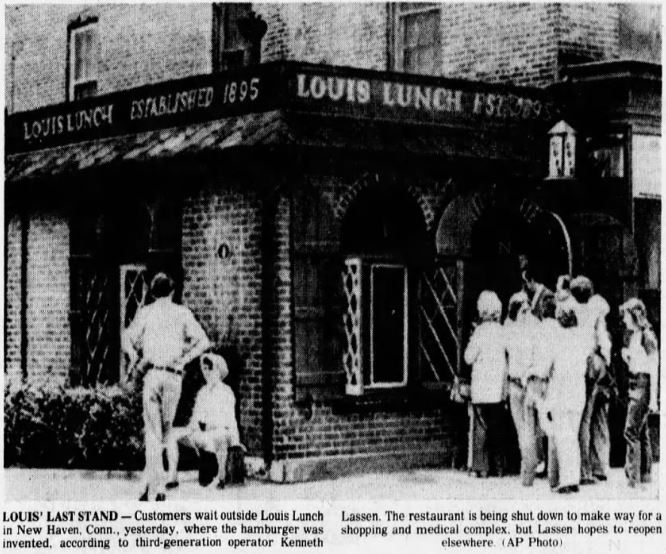 “Louis’ Lunch, a tiny 57-year-old city landmark, is threatened with nightmarish fates: having one of its walls removed, being enveloped by a modern building, or, worst of all, being destroyed.

The future of the 30-by-30-foot building, which sits in the shadow of the 10-level Temple Street parking garage, has been in question for years.

The luncheonette’s latest vision of horrors came recently with an announcement that a $12 million medical center would be built on the parking lot corner where Louis’ now stands.

‘I do not go without the building,’ proprietor Kenneth Lassen said after the announcement.

Lassen is demanding either that the medical center be built around his quaint brick building – with ‘air space’ above – or that it be moved intact to another site.

An official of the city redevelopment agency, which owns the site, says ‘every effort’ will be made to reach agreement.

Lassen, the third generation of the family that has run Louis’ Lunch since it moved into the building in 1916, claims the hamburger happened on the U.S. culinary scene there. The business was established at a different site in 1895.

‘I take my heritage seriously,’ Lassen asserted. ‘I’m fighting to save three things: a certified landmark, a way of life and the only remaining piece of pre-1900 architecture left in the center of the city.’

Lassen said he has even told the city he would agree to having the building moved intact to another site.

That would present a problem, however, because one of the luncheonette’s four walls actually belongs to the building’s next door.

Lassen has an answer to that problem, too. He said he has collected at least one brick from each of about 500 downtown buildings when they were demolished.

The bricks would be used, he said, to build a wall which would both ‘keep out the wind’ and be a memorial to New Haven’s past.”
-Excerpt courtesy of Newspapers.com, the (Piqua, Ohio) Daily call, “Louis’ Lunch Threatened by Progress March,” December 28, 1973. (top) Image courtesy of Newspapers.com, the (Mansfield, Ohio) News-Journal, “Louis’ Last Stand,” photo by the A. P., June 21, 1975

“Louis’ Lunch, which claims to have served the first hamburger, has closed its doors to make way for a modern nine-story complex of medical offices and shops.

Kenneth Lassen, the owner, says his grandfather, Louis Lassen, invented the hamburger and served it in the 12-by-18 foot snack shop starting in 1917.

Regular customers and the curious jammed Louis’ Friday for a last ground beef burger on toast and without ketchup.

Louis’, which depended on a neighboring building for its fourth wall, was popular with Yale University students and businessmen. There was room for only about 25 customers at a time and a line often formed oustide on the corner of Temple and George streets.

Lassen, who has fought since 1965 to preserve Louis’ at the current site or at another location he can afford, was optimistic he could save his business.

‘We still have a week, and miracles have happened in a week,’ said Lassen, who is known for his side orders of homey philosophy and good-natured insults.

The land is owned by the city’s redevelopment agency which first notified Lassen in December 1965 of its plans to develop the choice corner lot across from two department stores.

The agency gave Lassen final notice Tuesday to vacate the building, designated a New Haven landmark because of its association with the hamburger, by July 2. The city also has offered to store the small brick building for 60 days if Lassen finds a new location by Thursday.

‘Things look kind of cooked,’ he told a newsman. But he added, ‘I think this will be saved by someone who has a piece of land.’

Louis’ got its start in 1895 as a Meadow Street lunch cart operated by Lassen’s grandfather, a Danish immigrant. About the turn of the century, he began serving steak sandwiches.

Meat scraps from the steaks, cut up and cooked separately, were offered in a sandwich which the Lassens claim was the original hamburger.”
-Excerpt courtesy of the (San Mateo, California) Times, “Burger Birthplace Doomed?” June 21, 1975

One hamburger shop – to go – in New Haven

“The Lassens of New Haven, who have subsisted on hamburgers for four generations, have staked out a new site to carry on the family tradition.

Kenneth Lassen, owner of Louis’ Lunch, whose founder invented the hamburger in 1895, has invested his life savings in a new location for the tiny snack shop – ‘to leave my children something they can be proud of.’

The purchase of a Crown street lot, two blocks from the present location, which has been taken for urban renewal, ended a 10-year struggle between Lassen and the New Haven Redevelopment Authority.

Lassen, whose high-protein lunches are an integral part of the Yale University curriculum, promised in a telephone interview yesterday to reopen the restaurant in time for the fall semester.

‘We’ll continue to make them the same way my grandfather did in 1900,’ promised Lassen, who has stored the old vertical grills until the new interior is ready for their installation.

The redevelopment authority, which had planned to demolish the converted mid-19th Century tack shop to make room for a medical building-health club complex, has now agreed to move the old building to the Crown street lot.

Lassen, who closed the restaurant last week and stored the fixtures and wooden tables adorned with generations of carved initials, must install toilet facilities at the new location to conform with the health code.

Otherwise, he said that the ambiance and the menu – hamburgers, cheeseburgers, steak sandwiches – would remain the same.

Lassen said the restaurant grew out of his grandfather’s butter and egg delivery route. Initially, the only offering at Louis Lassen’s luncheon was steak and home fried potatoes. He’d ponder over the scraps of meat that were left over.

Being a resourceful man, Louis Lassen started grinding up those scraps and feeding them to his family. Eventually, he started grilling them at the restaurant next to the thin slices of steak.

In 1900, a customer in a hurry asked Louis to hold the potatoes and slap the ground steak between two slices of toast.

From that humble start, the double and triple hamburger, not to mention Ronald McDonald, evolved. Lassen has seen them all, from Wimpy’s to White Tower, and he refuses to engage in comparisons.

‘Ours is the granddaddy of all hamburgers,’ he said diplomatically. ‘I don’t think grandparents have to worry about competing with their grandchildren.’

Louis Lassen gave up his delivery route and moved the restaurant from the lunchwagon to its present 12-by-18-foot building in 1916, the year before Kenneth was born.

Lassen refused to engage in a numbers game, although he intimated that the number of hamburgers dispensed daily was substantial. The hamburgers are served with onions, salt and pepper and tomatoes, just as they were in grandpa’s day. The only difference is price: 80 cents for a double hamburger now, pennies in 1900.

The first hamburger each day is devoured by the owner – raw.

‘That’s the only way you can get the feel of the meat, to tell if it’s any good,’ Lassen explained. ‘Cows have moods, like people. If a cow was happy and gay, the meat tastes better.’

If not, Lassen said, he discards the whole batch and starts over.

‘Then I have my second hamburger of the day,’ said Lassen, who does not worry about cholesterol.”
-Excerpt courtesy of Newspapers.com, the Boston Globe, “One hamburger shop – to go – in New Haven,” by Bob Sales, June 28, 1975

“They’ll be turning out hamburgers again down at Louis’ Lunch, just like they’ve done ever since the burger was born there at the turn of the century. The tiny lunch counter has outfoxed the wrecker ball by 48 hours.

‘We’re buying the property out of our life savings,’ said Kenneth Lassen, whose grandfather reputedly stuck a piece of meat between two slices of bread for a hurried customer about 70 years ago to create the burger.

He said he’s ‘really, really elated and so’s the whole family. It’s just that …boy, are we gonna be in hock.’

The New Haven Redevelopment Agency has ordered him evicted from the old location to make way for a health club, parking garage and medical office complex…

Lassen was given until 5 p.m. Saturday to find a new home or have the tiny restaurant fall to the wrecker ball.

But he said Thursday the Redevelopment Agency agreed to preserve and move the tiny building, which has housed Louis’ since it shifted inside from a lunchwagon in the early 1900’s.

Lassen began battling the Redevelopment Agency 10 years ago, when his George Street site was slated for redevelopment.

Last week, the end appeared so close Lassen closed the restaurant in order to salvage some of the fixtures.”
-Excerpt courtesy of Newspapers.com, the Crowley (Louisiana) Post-Signal, “Burgers Back, Just Two Blocks Farther,” July 3, 1975