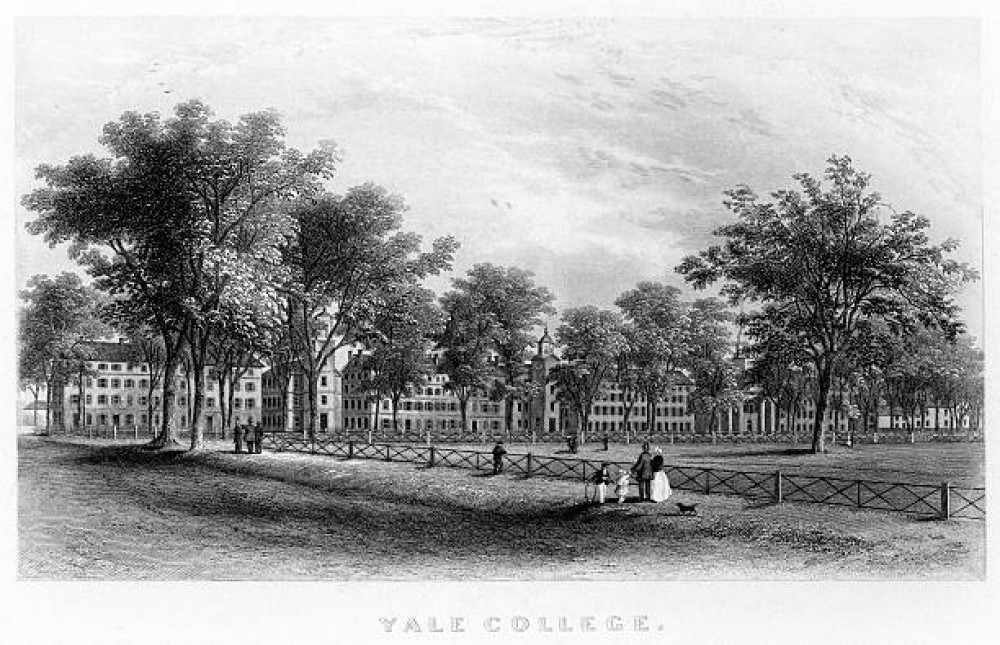 To Which He Returns Shortly With His Family — Mr. Peter R. Carll Important New Enterprises in His New Field of Activity

“New Haven’s old and esteemed citizen, Peter R. Carll, has returned from his stay in California to his Temple street residence and presents a picture of almost perfect robust health. In business there Mr. Carll displayed his characteristic pluck and energy, a commendable exhibition of which was presented to his fellow townspeople of New Haven when he planned and carried out the building of the Hyperion theater.

He has bought the Sierra Madre Villa hotel, which is one of the most admirably located pieces of hotel property in all California and is situated in the midst of a semi-tropical paradise. It is located on the south side of the Sierra Madre mountains, overlooking the San Gabriel valley, and has an elevation of 1,400 feet above the sea level. It is about twenty miles from the ocean, fourteen miles from Los Angeles and only five miles from Pasadena.

The railroad communications are most excellent. Pasadena is on the California and Santa Fe railroad, which passes within a mile and a half of the villa, and here stages meet all trains. The region round about is wonderful with its orange groves, which are among the largest in the state, the world renowned ‘Lucky’ Baldwin’s being one of them. Connected with the hotel is seventy-five acres of land which is so utilized that it seems like a glimpse at fairy land. It is laid out in velvety lawns, here and there fountains playing in the sunlight, shrubbery and flowers planted with the skill and taste of a landscape gardener, besides a large orange grove. Other trees abound, included being the lemon, lime, walnut, peach and fig trees. Grapes as well are growing and bearing their fruit in every variety.

All this Mr. Carll has acquired and even more. The view is one hard to describe, enough to say it is beautiful indeed. On the one side a huge mountain chain stretches away, affording the eye a picture of the rugged and grand; on the other side a more dazzling effect is presented from San Gabriel valley, teeming with its wreath of semi-tropical luxuriousness. One view in particular is that from the hotel’s front porch, looking to the west, down a long, broad avenue, groves of orange and other trees being on either side, reminding one of certain poetic descriptions of the entrance to paradise.

Comfort as well as luxury reigns at the villa. The air is pure and produces an exhilarating effect almost immediately upon the new comer. It seems to contain an ozone peculiar to itself. Mountain springs furnish a water which is unrivaled for its clear, sparkling coolness.

The hotel has already become famous, and its hospitality has been shared by famous men by the score, not only of this country, but of Europe and Canada. Senator Don Cameron of Pennsylvania is one of its most enthusiastic patrons.

It was only with the view of adding even to the beauty and size of the hotel and its surroundings that prompted Mr. Carll to advertise for the leasing of the same. So that he might give his personal attention to that work alone. He intends to make it one of the largest hotels in the state of California, put up Chinese pagodas on the grounds in appropriate nooks and corners, make new driveways and walks and in fact do little short of reaching perfection.

He will stay here about two weeks before returning.

Mr. Carll shipped from his orange groves and other groves this season twenty car loads of oranges, 300 boxes to a car, beside 1,000 boxes of limes and many hundred boxes of lemons, to say nothing of peaches, apricots, figs, etc.

Recently Mr. Carll received a flattering offer from a syndicate of wealthy California capitalists which he has now under consideration. It was namely: When these gentlemen have formulated plans now in the works, that he should have the supervision of starting several new towns and villages and the control of a number of important mining interests as well. The salary to be $50,000 a year.

Mr. Carll has already become one of the most popular men in Southern California and has become already warmly attached to the people and the surroundings. We join with the host of friends of the ex-marshal in wishing him unbounded prosperity in his new home.”
-Excerpt courtesy of the Library of Congress, Chronicling America, New Haven Daily Morning Journal and Courier, Saturday, May 23, 1891. (top) “View from vineyard towards Sierra Madre Villa. Shows Victorian-style buildings with cresting on roof; orchard and vineyard in foreground. In background, Sierra Madre Villa.” -Image courtesy of the California State Library, “Sierra Madre Villa,” E. A. Bonine Photo, Los Angeles, Cal., ca. 1890